How to avoid IOS 14 update on your Facebook ads

Not long ago, Apple updated its AppTrackingTransparency framework. It means that Meta (Facebook ads and Instagram ads) won't be able to track conversions and sales of mobile users. It’ll drastically worsen advertising results and cause an increase in lead prices.

But advertising platforms responded to the changes and created an alternative way of tracking conversions quickly enough.

I’ll explain how ads worked before and after the IOS 14 update to understand all changes.

The backbone of the advertising industry was the ability to track purchases through Facebook Pixel (cookies) in your browser.

Let's say you run an ad on your site, and after a person clicks on the ad, he goes to your site with your product or service. Next, the person buys a product or leaves a request. After this action, he gets to the “Thank you page” where you notify him that the transaction took place or the request is processed.

From a business perspective, this is a request/purchase. Technically, for Facebook, it's a page transition from one page to another. You were on the product page and ended up on the “Thank you page”. So you bought the item.

Facebook tracks these actions through Pixel (cookies). So, Facebook collects customer data, tracks sales, and optimizes ads. It's from previous sales that Facebook can figure out which customers are buying from you and optimize ads for people who are as similar as possible to those who have bought from you.

Apple has released an update that requires users to agree to allow Facebook to track their actions in the app. It looks like this. 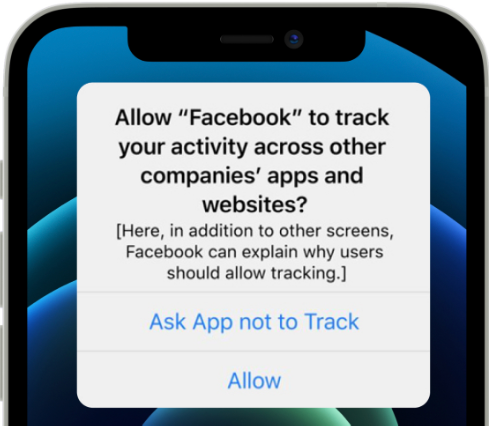 People don't like being watched. According to statistics from Bloomberg, only 25 percent of users have agreed to let Facebook track their actions. That means you don't get accurate stats on your sales and leads.

Facebook can't show your ads' effectiveness, much less optimize them. Before iOS 14, Facebook could track the path from clicks to sales, but now it just tells you there were 248 clicks, but we don't know what happened after. So there's a disconnect between clicks and sales. Facebook doesn't understand how many people bought your product after getting on your site.

The worst part is that Facebook can't optimize its advertising campaigns because it doesn't understand what type of people are buying from you.

To solve this problem and track ads on mobile effectively, you need to use Facebook conversion API (CAPI). It will allow you to send the data (Email, name, phone e t c) directly to Facebook, bypassing Pixel. In simple terms, a lead with this name and phone number bought a product. Based on that data, Facebook tags the user and displays the conversion rate in statistics.

So using Conversion API, you will not worry about tracking conversions on your iPhone. Facebook will do everything for you. All you need to do is provide it with a list of phone numbers and emails of the customers who have bought items or left a request on your website.